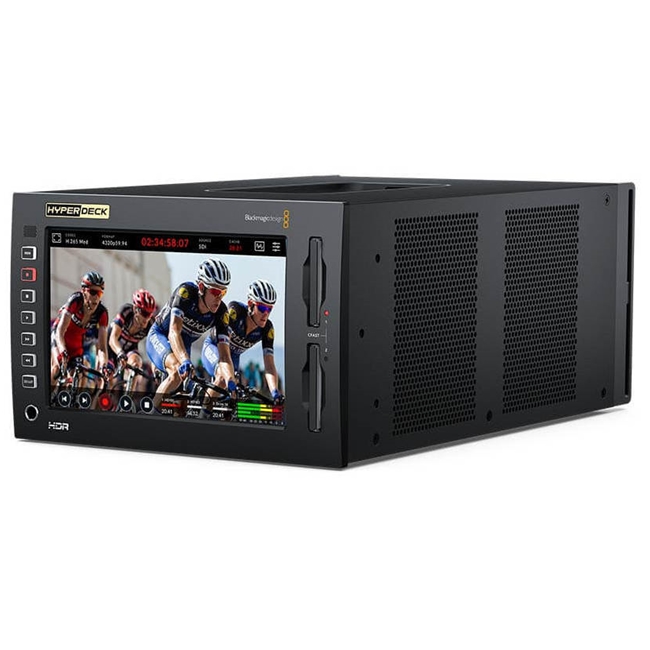 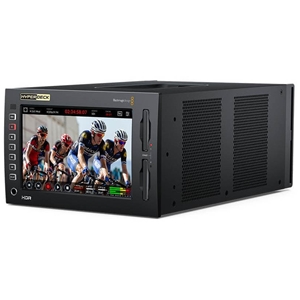 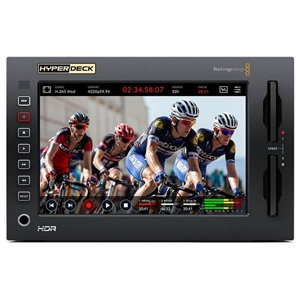 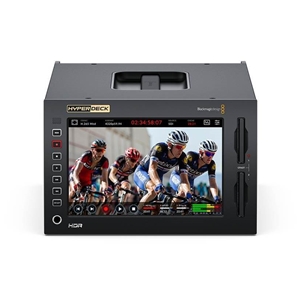 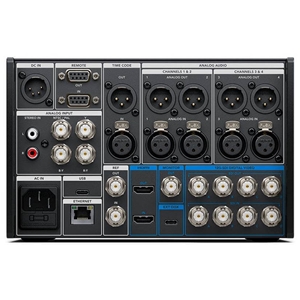 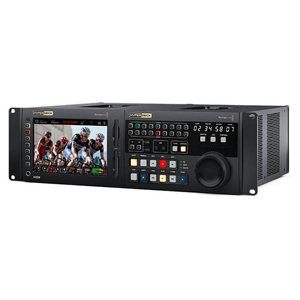 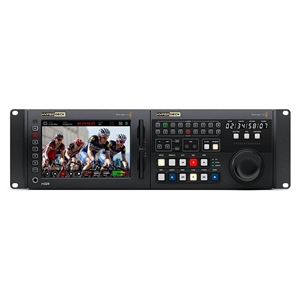 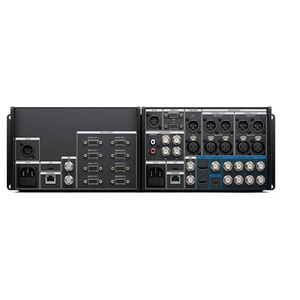 The new HyperDeck Extreme 8K HDR features the trusted reliability of HyperDeck combined with new innovations such as space saving H.265 files, optional internal cache, 3D LUTs, native 8K and HDR support. With the ability to record native 8K in H.265, you get reduced storage costs and amazing image quality. The large touch screen ensures a perfect view of your recording as well as control over all deck settings. You can then add HyperDeck Extreme Control to transform it into a traditional broadcast deck. This means HyperDeck Extreme is the perfect solution for the next generation of broadcast, live production and digital signage.

HyperDeck Extreme has an innovative touch screen user interface with deck controls as well as a large screen to view your recording. Then add a HyperDeck Extreme Control for traditional broadcast deck controls and a large shuttle knob that feels incredibly luxurious to use. You can even rack mount the HyperDeck and the controller. HyperDeck Extreme also includes 2 media slots, Quad 12G-SDI for 8K, analogue connections for archiving, USB-C external disk recording, plus a front panel speaker and headphone jack. There's also an optional cache that eliminates dropped frames if your media becomes full or is too slow. Both AC and DC power connections are also included for studio or on location use.

With its amazing versatility, HyperDeck Extreme is also great for live production as a master recorder, clip player and for recording ISO cameras. The analogue inputs allow you to record from old video tapes, so legacy programming can be used on the latest streaming services or for use in editing. Digital signage in 8K is easy with HyperDeck Extreme as it has 10G Ethernet for fast media uploads, plus it features a simple remote control protocol. You can even use it as a field recorder as it includes HDMI, SDI and analogue inputs with built in scopes and 3D LUTs. The scopes also help you QA masters to ensure compliance with broadcast standards before streaming and broadcast.

As streaming services have become common, preserving cultural diversity through maintaining localized content is increasingly important. The solution is to get each country’s legacy programs onto streaming services at an affordable cost. HyperDeck Extreme Control lets you connect to legacy broadcast decks, set an in and an out point, then edit. Just add HyperDeck Extreme 8K and HyperDeck Extreme Control to each legacy deck to keep them all archiving constantly with just one operator. It’s even possible to edit across formats by using Teranex Express to convert tapes from SD to HD in one step. You can control a wide range of decks, including Digital Betacam, 1 inch C format, and Betacam SP.

The latest Quad Link 12G-SDI is included so it’s possible to record and playback in full resolution 8K for amazing quality. The SDI connections are multi-rate, so you can use Quad Link 12G-SDI to get compatibility with other 8K products, or switch to SD, HD or Ultra HD using the single link 12G-SDI connection. To allow regular CFast cards to be recorded at high resolution 8K, HyperDeck Extreme uses modern H.265 files for 8K recording and playback. This means HyperDeck Extreme 8K is perfect for connecting to the latest 8K televisions and projectors. Plus it’s also the perfect solution when using ATEM switchers. With 8K broadcasting already happening in Japan now, you're ready for an 8K future.

The innovative touch LCD user interface provides incredible control. On screen, there are dedicated buttons for play, stop and record, plus a mini timeline for scrolling through your recordings. You can even image swipe to jog. The LCD includes a heads up display of timecode, video standard, media status as well as audio meters. Scopes can be enabled via the touch screen as well as focus and exposure assist. There's also an extensive range of settings all controlled from the large LCD. Plus you can load and save 3D LUTs. You also get direct buttons for transport control, enabling the 3D LUT and remote enable. Then you can always add traditional deck controls with HyperDeck Extreme Control.

CFast media support allows you to record to commonly available flash memory cards. The H.265 files are small enough to allow long recordings on standard CFast cards. Plus there are 2 CFast card slots so you can swap out any full cards even during recording, allowing infinite length recording. CFast cards are perfect for broadcast because they are small, high speed and affordable. You can even use a Blackmagic MultiDock 10G to add SSD compatibility. With H.265, you can record 498 minutes at 8Kp60 on a 1 TB card, 1,059 minutes in 2160p60 Ultra HD and 2,354 minutes in 1080p59.94 on a 1 TB card. That’s over 8 hours in 8K and over 39 hours in HD.

If recording to other media types is required, then the USB-C Expansion port lets you plug in an external flash disk for recording. USB-C flash disks have massive capacity as they don't suffer from any size constraint. Plus, it’s possible to record to the same disk you are using or editing, so you don't need to waste time copying files before starting post production. Flash disks are so fast, they can record high data rate formats that are too big for CFast cards, such as real time ProRes in 8K. Adding a Blackmagic MultiDock 10G also makes it easy to use SSDs for compatibility with other HyperDeck models. You even get on screen menus for managing external disks using the touch screen.

Sometimes your media can fill before you change to a blank card, or if the card is too slow, then you can get dropped frames in your recording. To eliminate this problem, you can install a PCIe flash disk into HyperDeck Extreme 8K to use as a record cache. This eliminates problems with CFast media or external disks, as the cache will automatically take over and record any content the media could not capture. Even if a card fills, recording will continue to the cache until it’s swapped. The cache even lets you record formats that are too fast for the media card or external disk. Common PCIe flash disks are used and a thermal pad is included to allow user installation. 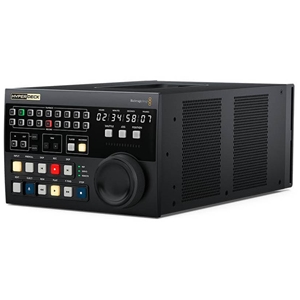