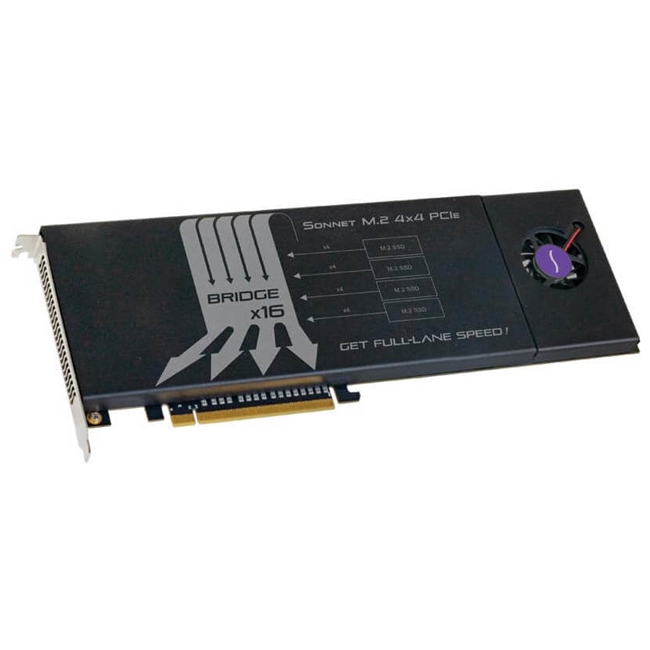 With the Sonnet M.2 4x4 PCIe card installed in your Mac Pro® tower; Windows® PC desktop or server; or Thunderbolt™ to PCIe card expansion system with an available x16 PCIe slot, you can use it for instant-access media storage or as a high-performance scratch disk. Mac® users can even install macOS® on one SSD to create an incredibly fast boot drive.(2) However you use it, this card’s performance is impressive.

Sonnet’s M.2 4x4 PCIe card is a full-height, full-length PCIe 3.0 card with a 16-lane (x16) interface. Featuring a unique Sonnet-designed x16 PCIe bridge, the card devotes four lanes of PCIe 3.0 bandwidth to each SSD you install. When installed in a Windows PC’s PCIe 3.0 slot with four SSDs formatted in a RAID 0 configuration, the card is capable of 8,500 MB/s transfers. Aggregate transfer speeds from four non-RAIDed SSDs of up to 12,000 MB/s are possible!

Integrating a Sonnet M.2 4x4 PCIe card into your system is easy—just insert it into a x16 PCIe slot and then start your computer—NVMe compliance ensures the necessary drivers(4) are installed automatically. macOS 10.14.4+ and Windows 10 compatible; the Sonnet M.2 4x4 PCIe uses the operating system’s built-in drive formatting utilities to format the SSDs. Drive health monitoring is supported through S.M.A.R.T. (Self-Monitoring, Analysis and Reporting Technology) data reporting, too.