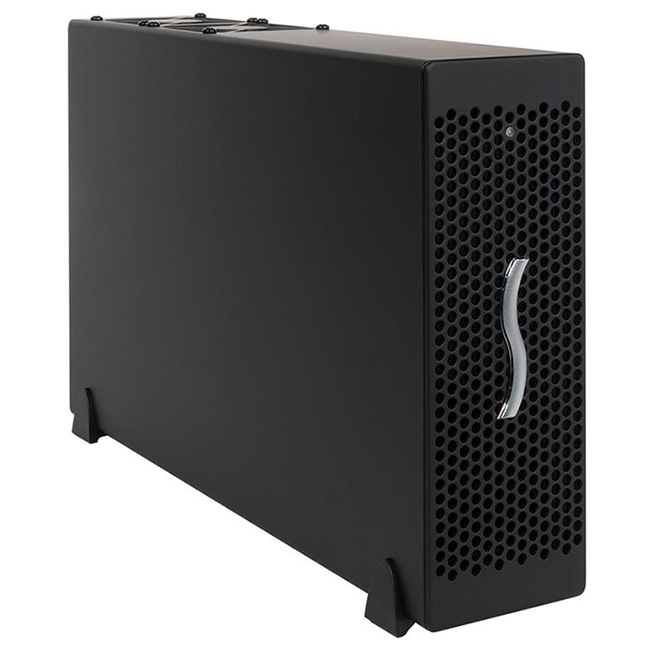 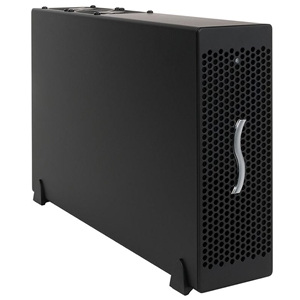 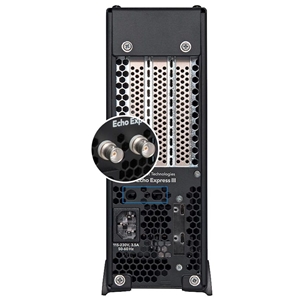 Important Note: Windows computers require the latest BIOS and Thunderbolt drivers to support this product. Check with your computer manufacturer for update information.

For pros working in the creative fields, a computer’s processing power alone is not enough to get the job done. A prime example is the latest MacBook Pro®, which, while offering great performance, lacks the PCIe expansion slots necessary to support specialty cards that connect pro video and audio inputs, transcode data, and connect to high-speed storage and networks. Instead of slots, these computers include ultra high-performance Thunderbolt 3 ports to support peripherals. Sonnet’s Echo Express III-D - Thunderbolt 3 Edition leverages the Thunderbolt 3 ports’ PCIe data to connect PCIe expansion slots outside of a computer. This desktop Thunderbolt-to-PCIe card expansion system enables you to connect three professional PCIe cards - including video capture, audio interface, SAS or SATA HBA, 16Gb or 8Gb Fibre Channel, 10 Gigabit Ethernet, and RAID controllers - at the same time to any Mac with a Thunderbolt 3 port.

The Echo Express III-D - Thunderbolt 3 Edition features a 40Gbps Thunderbolt 3 interface, which offers double the PCIe bandwidth and connectivity of Thunderbolt 2, and yields up to 2750 MB/s of bandwidth, enabling it to support 4K video capture and processing cards at high frame rates, and 16Gb FC cards and dual-port 10GbE cards at full performance(1)(2). With the ability to handle multiple demanding, high performance PCIe cards, support for connecting two 4K displays @ 60Hz or one 5K display @ 60Hz(3), and support for a vast array of Thunderbolt(4) and USB(5) devices, Thunderbolt 3 is a leap forward in every way.

Even with all that power, the III-D is enviro-friendly; it automatically powers on or off whenever the connected computer powers on or wakes, or powers off or sleeps, respectively.

40Gbps Thunderbolt 3 - The USB C That Does It All

The Echo Express III-D - Thunderbolt 3 Edition includes two Thunderbolt 3 (USB-C) ports; the first is used for connection to your computer, while the second supports daisy chaining of up to five additional Thunderbolt peripheral devices to a single port on your computer(4). The III-D includes 10Gbps USB 3.1 Gen 2 support, meaning you can connect a USB device to the second port using the proper cable or adapter. The III-D also provides full support for connecting two 4K displays @ 60Hz or one 5K display @ 60Hz(3). For connected devices requiring extra power, 15 watts is provided to connected bus-powered devices.

The Echo Express III-D - Thunderbolt 3 Edition is wrapped in a rugged, yet lightweight aluminum outer shell, resulting in a system light enough to carry without weighing you down, yet sturdy enough to securely protect the installed PCIe cards.

Its two large, slow-spinning fans, enhanced with computer-modeled airflow management, ensure that even hot-running cards remain reliably cool without the need to install an extra PCIe blower card that would prevent the use of one of the three slots. Because the fans automatically speed up and slow down as needed, you don’t have to guess which speed setting to select, and there’s no need for tools to change settings. There is no power switch on the chassis, nor is one needed, because the III-D automatically powers on and off with your computer

In operation, the Echo Express III-D - Thunderbolt 3 Edition is remarkably quiet—it may be comfortably used in noise-sensitive environments, and it is one of the quietest Echo systems. The natural convection of warm air through the PCIe cards is assisted by ultra-quiet, temperature-controlled, variable-speed fans, and vented out the top of the chassis with reduced air velocity and turbulence, resulting in little fan noise.

Echo Express III-D’s back panel has two BNC connector mounting holes, enabling the use of a RED ROCKET card without the need to install the BNC connector bracket that would normally occupy a valuable PCIe slot.