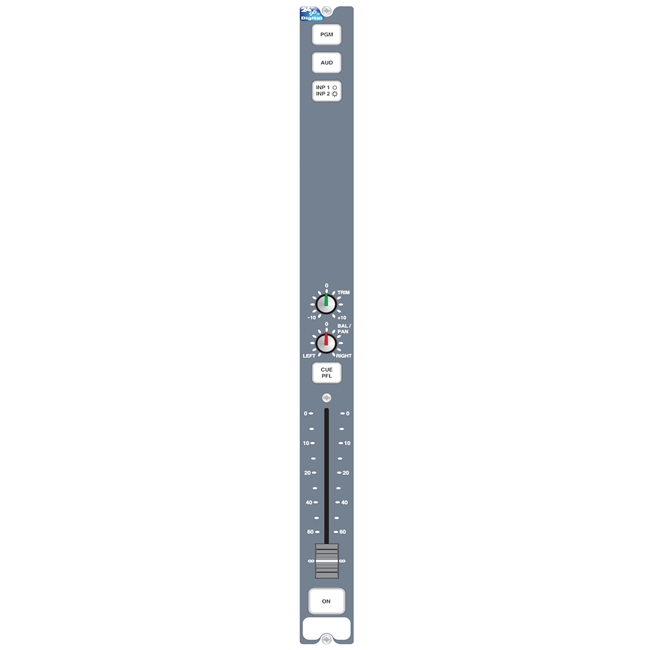 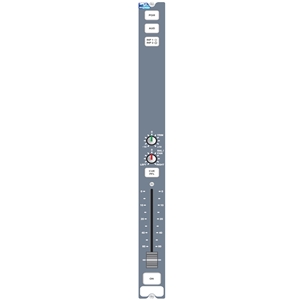 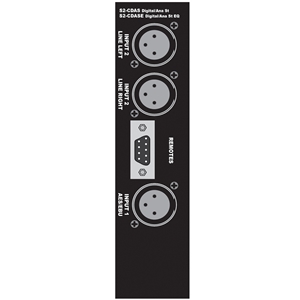 The INP 1/INP 2 button selects which input is routed through the channel. The button is illuminated in red to indicate when Input 2 the balanced analogue source is selected. The operation of the button is inhibited when the channel is "live".

Input 1 is configured to be the AES/EBU input on standard XLR. An additional jumper option can be used to decode emphasis when indicated by certain status bits in the incoming data stream.

The digital signals are converted to analogue and from this point the channel functions are the same as the S2-CS Dual Stereo Line channel with the addition that when Input 1 is selected and the ON button flashes green, it means that there is no valid digital input signal being received.

There are separate logic remote output controls for both of the two inputs providing start/stop functions by fader, or ON button. Remotes, etc, are triggered when the fader is up and the channel ON button shows green. The start function can be configured to be either momentary (500mS) or latched for each input. The remote outputs on the 9 way D-type plug are fed from NPN opto-isolators.

Continuous momentary start can be enabled such that when the fader is up and the channel is on, each press of the ON button triggers a momentary start.

Two remote pins can also be configured for general use as either inputs, outputs, latching, or momentary and active high or low. Uses for this include channel live indication or specific channel function remote control.

The 100mm VCA fader provides unity gain when fully open. The channel input signal is routed to the outputs whenever the fader is open, the ON button is selected and either or both of the routing buttons are selected.

The S2-CDASE channel is the dual stereo line channel as above but fitted with equalisation, providing 10dB cut and boost at HF (6.5kHz) and LF (100Hz). The EQ button places the equalisation in and out of the signal path. The button is illuminated in yellow when the EQ is active.

The channel can be used to control either one of two separate timer displays. 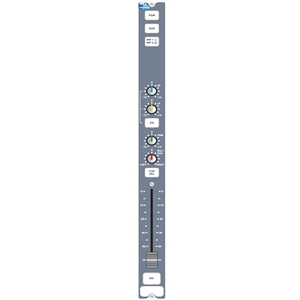