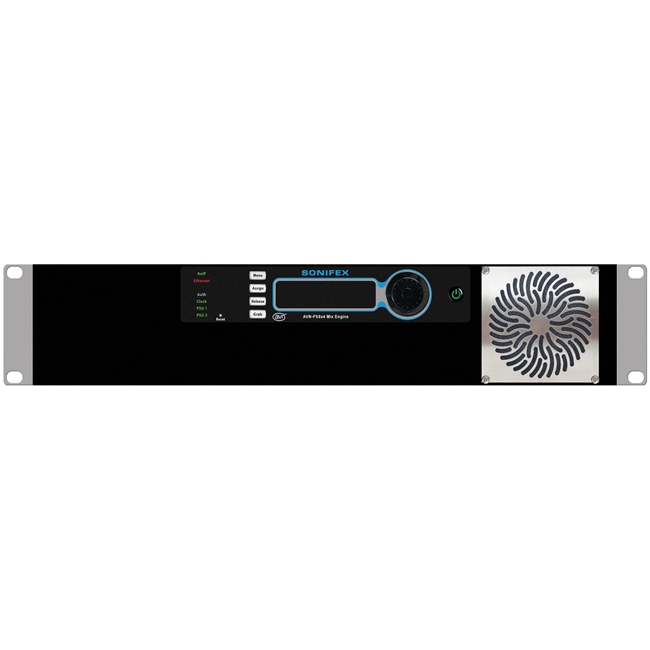 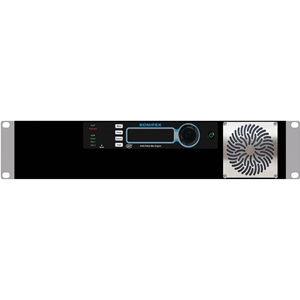 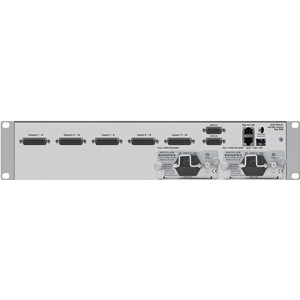 The presenter mixer system allows on-air presenters to adjust the audio levels fed to their radio or wired IEM systems, whilst also allowing Sound Control Room operators to adjust the levels remotely. The system consists of 3 types of unit all connected on a common Ravenna Audio over IP (AoIP) network with added audio sources derived from Ravenna based AoIP mixers or input portals. Setup and control can be provided via webpages and/or 3rd party applications. The system uses mono audio throughout.

The AVN-PX8X4C Mix Engine, as well as using AES67 audio streams, accepts 24 analogue mono input channels on 3 x DB25 connectors and output 16 analogue mono channels on 2 x DB25 connectors. Each mixer unit is able to create and control 8 virtual mixers, each capable of mixing any 4 sources (analogue or AoIP) to a single mixed output that is available locally at an output and via an AoIP stream (to the Presenter Unit and other destinations). The analogue audio line-up level will default to +18dBU = 0dBFS.

A built-in webserver is used for configuration settings, input/output routing and for defining which Presenter and Technician Remote Units are assigned to the particular Mix Engine and Virtual Mixers. Up to 4 MPPRs can be assigned to each Virtual Mixer on a first-come first-served basis. It’s also possible that both MPTRs could also select the same VM so a maximum of 6 devices can control the mix levels of a VM.

The Mix Engine will allow a maximum of 32 audio over IP input streams (each stream can be up to 8 channels). There are 8 virtual mixer outputs available. Each Virtual Mixer has 4 sources and 1 mixed output. There are also 2 more monitor outputs which play out the audio of the VM selection made on each of the 2 connected Technician Remote Units.

The Mix Engine has dual universal AC power supplies which are hot-swappable in the event of failure and have a green LED to indicate within spec operation. The front panel has LED indications and GPOs to warn of power supply failure. There are also front panel LEDs for network and sync/clock failure.