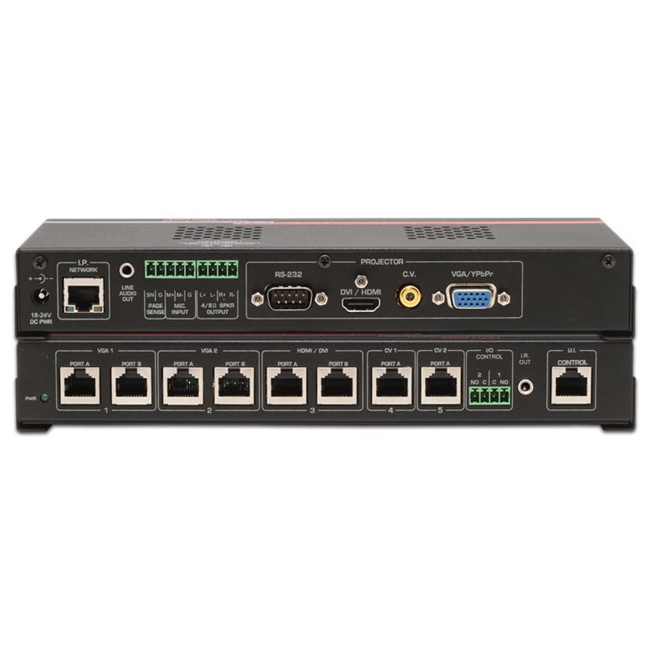 The VSA-51 is a family of devices offering the most advanced, customizable, easy to use, and affordable room control solution ever. It offers greater switching capacity of analog and digital video/audio sources. Designed around the VSA-51-R receiver, all source inputs and user controls are modular and connect to it via simple Cat5 cables. Furthermore, all wall-plates are powered from the receiver for maximum flexibility and simplicity of installation.

The VSA-51 offers advanced IP-based access, configuration and control. All configuration and control software is embedded in the receiver and served over HTTP to a browser which means you can access and control the device from a PC, Mac, smart phone, or tablet. Custom programmable serial strings allow advanced control of virtually any display via IR, IP or RS-232 plus an additional serially controlled device and 2 discrete outputs. Software features include embedded device control, task scheduling and automation, theft detection with notification, and more.

All configuration for the VSA-51 is handled through the embedded software running on the appliance. It is accessible through any modern browser such as from a PC, iphone, ipad or Android device. This offers administrators freedom to manage the system from any device anywhere inside their network. Built-in control interface gives users the ability to switch video, adjust volume, or perform any preprogrammed action from a touch screen device such as an iPhone or iPad.

The VSA-51 can control not only a primary display but also a second serially controlled device, unlimited IP devices, and 2 discrete outputs. All buttons on the User Interface panel and control software are programmable, allowing a high level of customization. Buttons can be configured to perform a string of actions so, for example, pressing the button to power on the projector may also trigger a motorized screen and turn down lights. It also supports IR pass-through to multiple locations.

Each input for the VSA-51 is on a single-gang decora plate which can be mounted together or separately on the wall or lectern. The system accepts a maximum of 5 inputs (2x composite, 2x VGA and 1x HDMI) each including stereo audio. All inputs transmit over UTP (Cat5) cable back to the receiver. Each input automatically receives power from the receiver so no additional wiring is necessary.

Tasks may be scheduled to run automatically at a specific time. Scheduled tasks can be one time or recurring. This can reduce energy costs and save on maintenance, for example by automatically shutting down the projector during non-business hours.

The User Interface has a panel lock security feature to prevent unauthorized tampering with the controls. An inactivity timer automatically locks the panel after a preset amount of time has passed without use. A custom button sequence is used to unlock the controls.

Page sense muting is available with the optional VSA-PGSNS kit. The system will automatically mute the VSA audio when it detects an incoming transmission on the paging system. The external sensor is completely non-invasive to the existing audio system.

The VSA-51 features a built-in audio amplifier with line level output. Each source as well as mic input audio levels are handled independantly of each other. The system also features 40W powered stereo output.