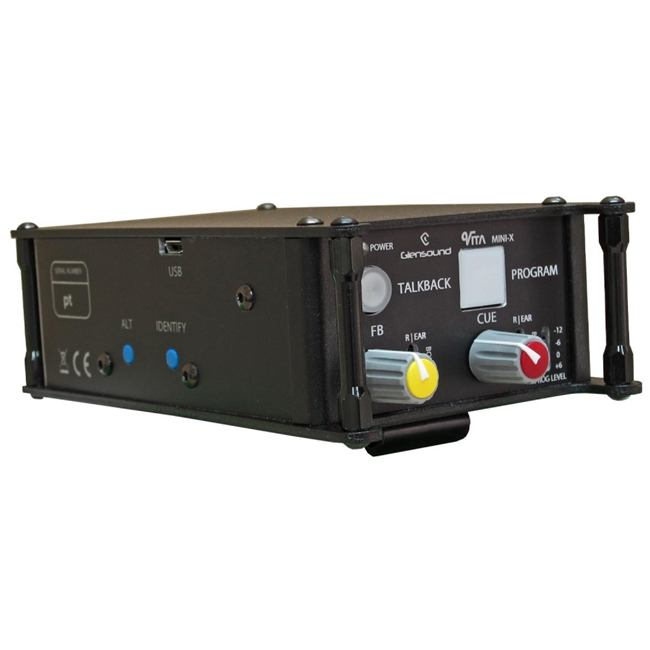 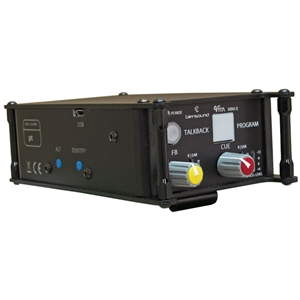 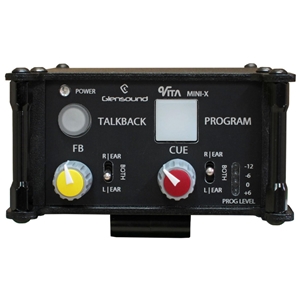 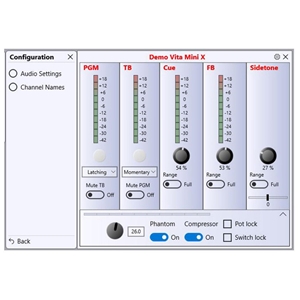 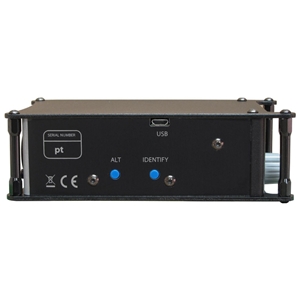 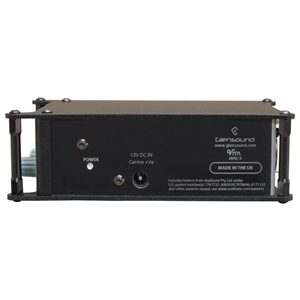 The VITA Mini X is a very powerful Dante network audio interface, in a compact belt pack style. It has a mic input and headphone monitoring connection for a single user, and contains two 4 wire circuits. One of these is typically used as an on air channel, and the other as a talkback channel.

The high quality microphone input, with the Glensound Referee compressor, makes the VITA Mini X suitable for on air commentary use, particularly when pitch side.

The flexibility of the talk button configurations means that the VITA Mini X can also be used as a talkback unit as part of a Dante® or AES67 network.

Settings can all be controlled using the Windows 10 app GlenController.

VITA Mini X is a Dante Broadway design, allowing for greater functionality and network bandwidth when compared to Ultimo based devices.

Two 4 Wire Circuits
The VITA Mini X has two 4 wire circuits. These are typically used as main programme on air, with a separate talkback circuit. The push buttons for each circuit are configurable and can operate in different modes, to allow configuration for different types of uses:

Latching on/off
Momentary push to talk (PTT)
Intelligent mode where a short tap is latching, but a longer hold becomes momentary
Always on and mutes when pressed (cough)
Pressing one button mutes the other circuit (talkback)

Headphone Monitoring
There is a 6.35mm jack socket for headphone monitoring. Each of the two 4 wire inputs can be selected to be in the left ear, right ear, or both ears of the headphones, depending on the user's preference. The level of each input can also be independently selected.

The headphone monitor also includes sidetone (at a configurable level). Sidetone is the commentator’s own voice.

Single Input
The VITA Mini X is a single user unit, with one high quality input. The input is mic/mic+48V switchable, on an XLR input, with a variable gain control.

As the VITA MINI X can be used for on air broadcast, Glensound’s Referee compressor limiter is used to control the audio levels and prevent any clipping. The Referee compressor has been developed over many years of working with sports commentators, and provides a gently increasing compression as the input signal approaches clipping. In normal use the compressor is not active as it only starts working as clipping approaches, so normal dynamic range is maintained.

All versions also have the 6.35mm headphone jack socket.

The Broadway chipset has been designated as AES67 compliant by Audinate and as such it is possible to use the VITA Mini X in AES67 network environments. It can also be used in SMPTE ST-2110-30 environments when used with Dante Domain Manager.

Power
The VITA Mini X has two power source options: PoE from a network switch/midspan injector, or from an external 12VDC input on a barrel connector.

PPM Meter
A front panel 4 segment PPM meter showing -12 to +6dB in 6dB steps provides confidence to the user that their outgoing level is set correctly and can also be used as a visual aid to indicate that the microphone has been switched on to the programme output.

Routing
The Vita Mini X features 8 inputs and 8 outputs to the network. These additional channels allow for some extra functionality across the network:

The mix channels are all fixed gain and allow a simple way to create a talk group.

Network Remote Control
GlenController is a Windows 10 PC application, and it can be downloaded for free from https://www.glensound.co.uk/product-details/glencontroller/under the ‘Latest Version’ tab. When launched, GlenController scans the network for all connected VITA Mini X units, which show up on the left hand side. The function of each VITA Mini X is replicated on GlenController, with each unit receiving its own visual controller module.

Remote Control Of Mic Gain Levels
There is a setting to select +48V phantom power on/off. A rotary control then acts as the gain level up and down between 7dB to 70dB, with the meters indicating the level. This all operates in real time.

Talk Button Configuration
Directly clicking on the program or talkback button on GlenController will work in the same way as if it was pressed locally on the VITA Mini X itself. This allows an engineer to have remote control of the mic on/off function. Each button can be set independently in the following modes:

The operation of a button can also mute the other circuit. For example, this is used to mute the program mic when the talkback button is pressed.

Local Control Security
GlenController can disable the local controls on the unit. This gives security to the engineer using GlenController that they have full control of all levels and operation, and they cannot be overridden. If the pot lock or switch lock controls in GlenController are not active, then adjustment on the local unit will override the remote setting. 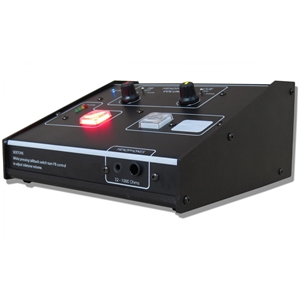 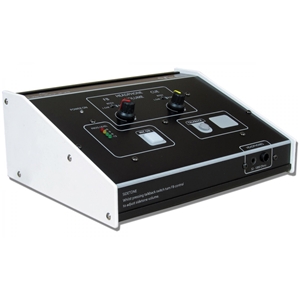 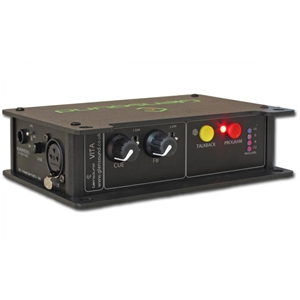 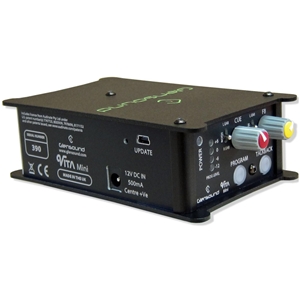