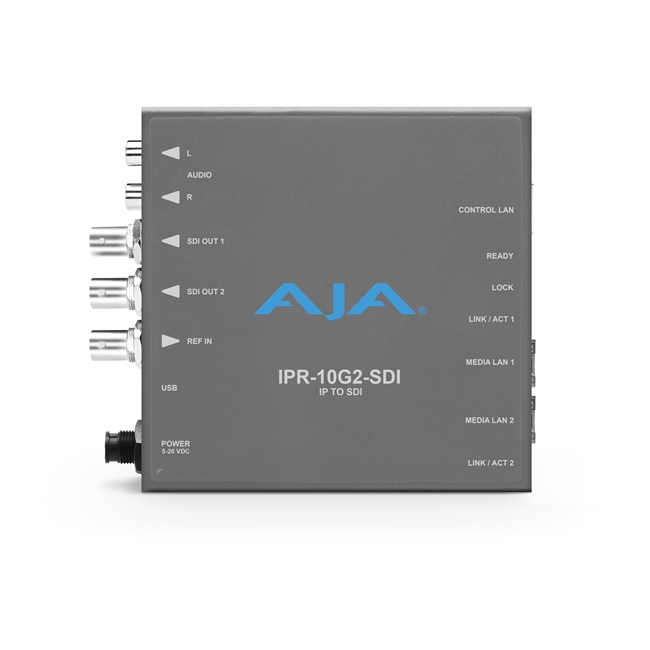 It receives SMPTE 2110 over 10 GigE connectivity, formats the data for output over 3G-SDI, and the associated audio from the video stream is extracted, synchronized, and embedded into the 3G-SDI signal and also output on an analog RCA interface.

The IPR-10G2-SDI also offers 1x Reference In via BNC. This makes it ideal for integrating into existing basebands environments such as master control, a truck, or an edit suite.

IPR-10G2-SDI extracts a SMPTE ST 2110 essence from an incoming IP stream and presents it for display on SDI devices.  Providing two SFP+ cases for protection with "hitless switching". Its rugged, fanless, Mini-Converter design is ideal for placement in a wide range of display scenarios, from studios to field.


Monitor ST 2110 Video and Audio from anywhere on the Network.

The IPR-10G2-SDI is a SMPTE ST 2110 to SDI Mini-Converter suited for point-of-use applications including source monitoring and 3G-SDI output to compatible devices. With two 3G-SDI outputs with mirrored source video, you can drive a display and connect to 3G-SDI simultaneously.

With 3G/1.5G-SDI routers often at capacity while facilities await their transition to IP, there is a huge benefit in being able to send video sources from a feed, camera, router or edit bay via IP and provide SDI monitoring at the destination while feeding your video and audio further into a 3G-SDI chain.

The AJA IPR-10G2-SDI receives SMPTE ST 2110 IP video and audio, then formats the data for output over 3G-SDI.

The audio associated with the video stream is extracted, synchronized, and then embedded into the SDI interface as well as output on an analog RCA interface.

All AJA Mini-Converters ship with a universal power supply that includes international plug connections for use around the world.
Trustpilot